Kara Quest is set in the Rastin-Vresch Continuity, along with Apocalyption, NicQuest, The Protagonist Dies, and BlazeQuest. Drawn by Reka.

Our Protagonist. Kara sets out with the arguably heroic goal of stopping Rastin, destroying shit and molesting people all along the way. Although vague evidence is shown that she might be smarter or kinder than she lets on, Kara is extremely temperamental and violent, a drunk, and usually beset by assholes. As it is, a day where she only brutally murders a few people is a pretty good day.

It never comes up, but Kara is the tallest person in the cast, and the scale for which all other characters are measured. In a quest filled with art distortions, Kara's "taller than everyone else"ness is the only constancy.

Our... Lancer? Hope worms her way into the party for the sole purpose of aiding the fight against Rastin. Although small, she proves to be very knowledgeable, and provides massive exposition and magical healing towards this goal.

Hope briefly interacts with /Quest/ on a personal level during the interlude chapter by summoning the Orb of Limited Psych, revealing herself to be much more pragmatic and focused than a girl her age should probably be. She admits to the orb that she is bad at planning... but she is apparently cunning enough to get people to do her work for her.

Post-Crystal Powers: blasting the shit out of things with pure light

Our Designated Villain. Rastin takes over the city Kara lives in with the aid of his Magic Crystal and MIB Army, eventually planning to take over the world -- just because he can. During their inevitable meeting, Rastin explains several hazier plot points to Kara under the guise of a villain's monologue, although he is an admitted troll and it's unknown how many of his words can be trusted. He seems to enjoy taunting Kara with answers that don't fully explain her questions, or bring rise to new ones.

He enjoys drinking tea in front of other people and being a complete asshole. His favorite anime is Tengen Toppa Gurren Lagann.

George is an adorable Cutebold, Kara's best friend, and probably the sanest person in the cast, which isn't really saying much. Kara finds him standing outside the Happy Trigger near the beginning of the story, briefly ponders over his existance, then kicks him in the groin and kidnaps him to drag along with her adventures. They are soon married.

George is completely unable to talk, merely voicing an unintelligible series of "YAYA!", although he remains very expressive and is clearly at least somewhat intelligent, despite the language barrier and sense of general complacency.

Lance is a creepy fucker who likes to murder cats. He joins Kara briefly for the promise of a weapon and ownership of any cats the party may find. He was generally dependable, but still creepy.

He was eventually consumed by a massive hoard of cats and nobody mourned.

Lance also wears a cape, which is not nearly as cool as you'd think. 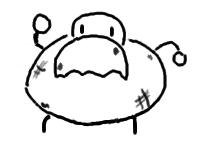 Prevous is a fat bastard, and one of the owners of the Seven Deadly Sammiches, as well as a former trucker. He joins Kara for the promise of a good meal.

In retrospect, feeding Prevous is incredibly expensive, but Kara doesn't really seem to care at any point. He also has extremely debatable hygiene. But on the plus side, he's superhumanly tough, surviving more than his fair share of damage, and is generally pretty happy to be along with people.

Jeslyn is a gold digging bitch, and one of the owners of the Seven Deadly Sammiches, in charge of budgeting and anything else related to money. She joins Kara after being paid a disproportionately large amount of money to do so. Afterward, she spends a lot of time reminding Kara that she owes her even more money following the total destruction of her store.

Jeslyn will do anything for money. Even that. But she does have standards. So it will be incredibly expensive.

Jay is the head of Ignometics, the magical research facility. He's a generally nice person who provides Kara with magical items and enchantments in exchange for funding, and gives her money in exchange for things to research.

Jay is a little nerdy, but very responsible. He also has a ponytail that he probably thinks makes him look cool.

An absolutely massive horde of cats, taller than most buildings. It was summoned after Lance ingested an entire bottle of cat attracting lotion, at /quest/'s suggestion. It proceeds to obliterate several MIBs, trample Prevous, and devour Lance. It then leaves, never to be seen again.

The horde included some cat-based cameos, a Mega Neko, and at least several hundred regular cats.

Laloth is a lazy fucker, and one of the owners of the Seven Deadly Sammiches, usually left in charge of low demand chores nobody else can be bothered with at the time.

He appears briefly to sell Kara sandwiches during her first visit to the store, and seems to recite lines from memory, not even bothering to alter them for gender. He's cheerful, but extremely unresponsive to all forms of influence.

Teabot is a generic robot created solely for the purpose of serving Rastin and his guests tea. He is very dedicated, and becomes very sad when people do not accept his tea. He is also incapable of saying any other word than "Tea".

Mysterious figure who appears in the very final "Epilogue" panel of the story, which may or may not be canon. Who is he? What does he want? What is his connection to Rastin? Nobody knows!

Kuhral appears during the interlude as a tiny cat with two tails, and is probably a remnant of the Cat Horde. She follows along with the party on her own for awhile, mostly by riding atop George's head. Although she doesn't really contribute anything, she does let Kara to make some last minute cash by letting Jay scan her for magic. Kara subsequently fails to use this cash for anything. Maybe she gave it to Jeslyn. Who knows!

Kuhral mysteriously disappeared shortly into the siege on Rastin's Headquarters, presumably because it got too dangerous for her, but mostly because the author got tired of drawing her. Nobody cared.

Nicolas is bumped into on Kara's way into Ignometics. Kara shoves him to the side, because clearly, she is far more important. What is he, a lawyer or something? That's boring. And stupid. He probably doesn't even have a shotgun.

Rudy appears briefly along with the giant cat horde. He's the last of the horde to leave, giving Kara a parting Seductive Glance before he goes. Although no doubt capable, Rudy fails to assist Kara in any way, no doubt because his incredible manliness would have quickly derailed the quest and eclipsed Kara's status as protagonist, and Rudy is just too much of a suave motherfucker to stay where he is not needed.

Tom appears very briefly (ie, a single panel), riding atop the giant horde of cats. He fails to do anything of importance but wave enthusiastically, but was still apparently cool enough to get an image on the cast page.

Turk and J.D. appear very briefly (ie, a single panel) to see Kara off from her departure from the Sacred Heart hospital. While Turk waves goodbye, J.D. stares off into space, no doubt imagining what fantastic adventures he would have at Kara's side. They don't even get an appearance in the cast image, the poor schmucks. No doubt they'll just have to be satisfied with all their wads of doctor cash.

Xom appears from the Magic Crystal after George accidentally zaps it with the Mox Wand, unfolding from a large, strangely shaped shard "in a way that it could only do if it were composed entirely of lines". Xom thanks Kara (and not George) for releasing him, then proceeds to 'help' the party by doing various impossible things, half of which is not actually helpful at all.

Despite being a god, Xom apparently can't understand a damn thing George says.

Hope summons the Orb of Limited Psych with the aid of her spell book during the interlude chapter, in order to help her save Kara from death or capture. It's name is a play on words, from both the small number or replies the author expected, as well as its very brief appearance in the story.

At the end of the chapter, having served its purpose, Hope destroys the orb so that it can no longer influence her decisions.

This book is visibly carried by Hope in most of her appearances. It's unknown what exactly is inside it, although she does use it to help her summon the Orb of Limited Psych. Presumably other spells were inside as well.

You'd think it would have a bigger role, but it doesn't.

The physical manifestation of all Magic. The Crystal binds to whoever touches it, granting them unlimited power and the ability to do just about anything, but not the knowledge of how to use it.

Rastin explains that he found the crystal deactivated and bound himself to it, activating it soon after and flooding the world with magic. He further explains that the easiest way to relinquish ownership is to kill the owner -- him.

It never comes up, but the Magic Crystal's real name is "The Loom". Hope is assumed to have had prior knowledge of and have been searching for the crystal -- and Rastin beat her to it, the god damn troll.

In reality Xom's Cane, supposedly created completely accidentally by Ignometics, although it's possible it was actually summoned. Using it causes completely random and uncontrolled effects that flew in the face of logic and causality, coinciding with whatever the author wanted to happen at the time.

After being unintentionally used to release Xom from the Magic Crystal, Xom asks for it back, where it is quickly handed over. Xom keeps possession of it for the rest of the quest.