Join Mudy, the kobold bard as he sings his way to adventure and fame! He starts in a box but works his way up.

A long-running quest set in the Mudyverse with 30+ chapters, authored by none other than Reaver himself.

MudyQuest is on indefinite hiatus, and probably dead despite a few revival attempts. Some of /quest/ still holds out for the remote chance it could come back. 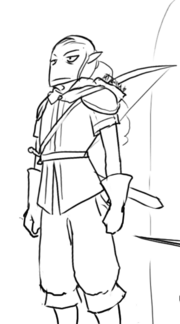 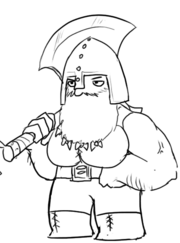 [TODO: Convert to use questart template]

After falling in love with Princess Silvermoone, it is Mudy’s determined goal to gain a kingdom. At the foot of the princess’ tower, he makes the acquaintance of an elf knight, who kindly carries him to a blacksmith. Mudy is able to persuade the smith, Axebeard Goldwomb, to help him in his cause.

Upon entering the Forest of Dread, Mudy and Axebeard encounter two skullmen, who seem to be very concerned with apples. Following them stealthily, the party reaches the skullmen’s base unnoticed. By ambushing two other skullmen, Mudy and Axebeard are able infiltrate the encampment in a most clever disguise.

The camp’s field marshal, Calavera, sees through the heroes’ disguise and the quest almost took a terminal turn for the worse. Fortunately, Mudy challenges Calavera to play the Oldest Game and defeats the lich with the help of his wits and the suggestions of countless Anons. Mudy becomes the new leader of the skullmen army.

After a conversation with the Skullking, Mudy decides to give a speech for the army he gained control of and orders a great carousal. Afterwards he gets to know Ivar and Rune and also his two generals, Totenkopf and Darkmoon.

Mudy has to deal with the tensions between his generals, but they quickly decide to rally the army and prepare for the arrivel of the Blutjaeger, one of the Skullking’s elites. The day ends with a terrified and homesick Mudy, but thankfully Ivar and Rune are able to help.

After being woken by Darkmoon, Mudy is informed that the Blutjaeger has already arrived. Facing the heinous creature, Mudy explains the recent events and how he became leader of Calavera’s army. At first, Raital, the Blutjaeger, is not amused by Mudy’s words, but since arms seem to be unable to harm her, the bard has to persuade her with words to leave him in charge of the skullmen.

Raital's appearances Inside the Quest, as well as some of Reaver's own commentary.