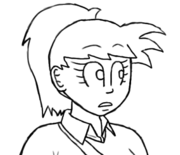 The main protagonist of this quest. Likes to wear her hair in a ponytail. Has telekinesis.

Sarah was born on the New Washington colony on 4/28/2145 to Jim and Andrea Hanchett. She is the middle child, with Jake being her older brother, and Sophie being her younger sister. Enrolling in college, she graduated with a doctorate in Mineralogy and minored in Astronomical Communications. She was hired by the Equinox Survey Systems company and subsequently joined a survey mission on the UTR June. The origin of her telekinetic abilities is still shrouded in mystery.

Sarah is also a unit of measurement for breast-size. Example: A neumono on average is 0.8 of a Sarah, meaning the average neomono's breast size is only 80% of Sarah's. This is not canon and should be disregarded.

A Johnson-series maintenance robot with a broken vocal modulator. Notable for its vaguely phallic shape. Has since abandoned the highly suggestive shape for a more practical one.

A hardy dwarven male. Has probably seen some shit since dwarves tend to be long lived. 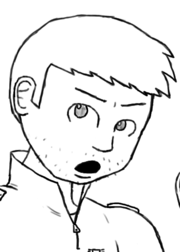 Member of ship security. Good at giving orders. Has once suggested that he is a former Marine. Current primary armament is a hand taser. 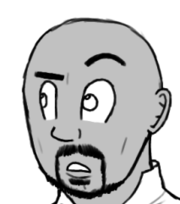 Another fellow ship security person, albeit higher in rank. Also armed with a taser. 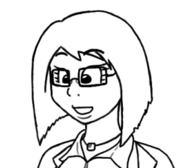 A geologist and meteorologist. Classy dame. Sarah's roommate aboard the June. 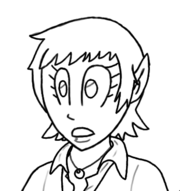 Most definitely an elven lady. Really does not like being trapped aboard a crippled ship filled with monsters. 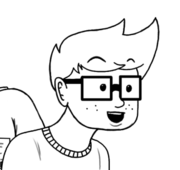 A meteorologist and part-time engineer. Suffers from hypomania and ADD, though 'suffers' is a relative term.

Gregorian-class science vessel, registry number SC0431. Launched in the year 2159. The titular location of the quest.

Planet that the June is orbiting.

Our heroine starts by awakening on a retractable hospital bed with no memory of who or where she is. Suddenly assaulted by a hallucination, she breaks the room's two-way mirror with a telekinetic blast. Upon leaving the room, she finds a hallway with blood on the walls and floor and a drawer with proper clothes. After discovering her identity as a Mineralogist via an ID card, she finds a small two-wheeled robot named Wheelbot with a speech impediment (or perhaps a vocal malfunction). The duo find the Chief Physician's Office and find the sole occupant dead from massive blood loss. Sarah discovers a PDA with a text log that indicates a patient subject to an incident of unknown nature caused problems for the facility she awoke to. Also disturbing was the fact that Sarah was comatose due in part to this patient and/or incident. After acquiring a few more items, she enters the Medical Lab and notices a window. Anxious for answers to her location, she draws the blind and stares out into deep space. She is on a space ship.

Reeling from learning her location, Sarah almost misses a monitor repaired by Wheelbot. A bearded man named Devin appears on screen who summons Lieutenant Taylor, a fellow ship member. Before Sarah can explain her situation, the blast door at the end of the hall opens and Taylor shouts for Sarah to run and find a box. Leaving the Medical Lab, Sarah sees a bleeding, shambling, undead Dr. Llewelyn threatening to kill her. As he moves closer, Sarah is paralyzed by a massive headache which triggers a psychic ability: telekinesis. Sarah throws Dr. Llewelyn through the doors into a metal container, seemingly killing him again. Walking into the hall, she spies two more undead figures stumbling down the hall. After telekinetically throwing them, Sarah opens a container with a MediBot inside, which is less than helpful. Sarah makes her way down the hall, Wheelbot and MediBot in tow, as they enter a storage room at the end of the hall. There, sitting in a secured box, is a .22 handgun. Sarah picks up this handgun and uses it to kill three zombies again, including Dr. Llewelyn, but not before he lifts the deck's lockdown and destroys MediBot, prompting the sudden appearance of a zombie horde. Sarah sprints down the hall into an elevator, sealing it before the murderous horde can get to her. On her way to the Secondary Bridge, Sarah is once again assaulted by a hallucination. Staggered from the spectre of horror, she recovers her memories of herself prior to boarding the UTR June. Reaching her destination, Sarah encounters Lt. Cmdr. Rob and Lt. Taylor again, as they welcome her to the bridge.

Sarah explains how she arrived to Rob and Taylor, and reunites with her shipmate Cherie Kirsuber, fellow scientist Elena Treeriver, Devin, and tinkerer Steven Harlio or "Seets" for short. Taylor informs Sarah of the events preceding the 'incident:' there were shuttle missions down to the surface of planet D-74, when there was a medical emergency that rushed someone back to the ship. Following that, there were malfunctions in the ship systems after which people started dying and mutating. Sarah explains that it might have to do with her strange powers, and shows Taylor her telekinesis. Taylor, impressed more than spooked, reassures her. Sarah gains the Tactile Telekinesis ability, then goes to get food and reads the captain's log, which elaborates more on the situation. Sarah talks to Elena and Cherie more, learning more about the planet missions and how a female avoided the sickness somehow. Elena elaborates on how a cave on the surface of the planet may have been responsible for the sickness and mutations. Before they can explore more about this, the bridge lights go out and a mutant breaks in. Sarah shoots it with the pistol several times and flings it into the bridge windows, where the mutant explodes and breaks the window triggering explosive decompression. Sarah barely manages to avoid getting sucked into space and rescues Wheelbot, and slips into unconsciousness as Taylor checks on her. Sarah dreams of a gurney that attacks her and sears the mark on her arm, showing that it is a handprint. She awakes to find that two more zombie mutants broke into the bridge and attacked Elena before Rob and Taylor could kill them. Seets manages to get the bridge console working, to which the survivors vote on a plan of action. Sarah's vote decides the course of action: make a break for the shuttle bays and escape the June. 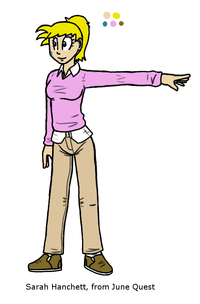