Lutzi has made one appearance Inside the Quest. [1] 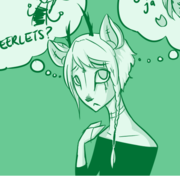 Gunter is the protagonist, a frolich deeling whose only profession could be described as selling junk. Fi has the power of empathy, and can sense the emotions of others while also projecting fir own. Despite this, Gunter fears the emotions of others and often lacks tact and sensitivity. Gunter is determined to find a cure for the disease threatening to kill fir mate, Lief.

Gunter's mate. A cynical, gloomy traurig deerling with the power of corrupting touch - the ability to atrophy or weaken anything ti touches. Ti used to study biotheology and supernatural chemistry at the University of Geweihburg, but was forced to drop out due to lack of finances - something ti is still bitter about. Tir most recent concern, though, is the mysterious disease that has confined tir to a bed and weakened tir powers. 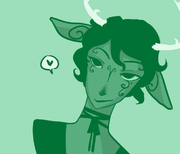 A lecherous tailor with a malicious sense of humor. Lutzi flirts with anything that moves and would most likely attempt to fuck anything that fit those parameters, as well. While Gunter dislikes tir, ti has managed to convince the frolich to allow tir to come along on fir journey to find a cure for Lief's illness. Lutzi has the power of engendering lust, and uses it liberally. 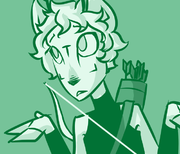 An excitable young Frolich who met Lutzi and Gunter on the road leaving their home town, Ahornblatt. Hans is a beast hunter with the ability of engendering bravery, both in firself and others. Fi also fancies firself to have a talent for puns, though fir traveling partners would disagree.

A towering Blaireaux officer, a member of the troops occupying Winzigstadt. She has, under a not-so-vague threat, compelled the traveling deerling to take her to Geweihburg in order to secure permission to occupy from the deer gods, via the religious centers in the city. While quiet and gruff, she seems to be largely civil to the deer.