A sort of sequal to Venji Quest. Involves pirates, a cast of characters stolen drawn from other quests, and bird. Lots of bird. Peep.

Starring (in order of appearance):


The best goddamn pirate to ever exist. Sails the oceans with her trusty bird Roz looking for new lands to plunder and people to recruit to her crew.

of Help the Dragoness' and a Tezakian, respectively 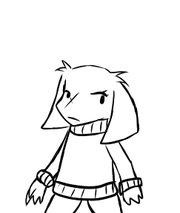 of Sue Quest, Sue Quest Too, and oh I guess Cave Story


A member of Venji's crew. Works with Jiniki and finds a ship and land.


Wants strength and attractiveness to get Nilaka's attention.

of Tezakia Quest and/or the Los Angeles Lakers


Grants Boaga's wish by giving them... majicka of a sort.

Kanela is the captain of the ship that Jiniki and Sue find. Headed for the Lost Island. Surprisingly can matche Venji in swordplay.

of Unnatural Selection (sort of)


One of Kanela's crewmates. Oh wait, it's actually

A dragon Venji and co. encounter in a cave while searching the land they explore.

of This Is A Story


Ijnev's master. Makes others give in to their inner desires.

Ashela of Venji Quest does not appear onscreen, but is a part of Venji's crew.

Captain Venji has appeared once Inside the Quest. [1]