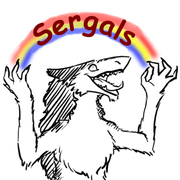 A memetically popular race on /tg/, and (at one time) probably even more popular on tgchan. Prone to cannibalism, murder and double-parking. They are originally from the Vilous setting, but are also a part of the Unified Setting.

Sergals come in come in northern and southern varieties.