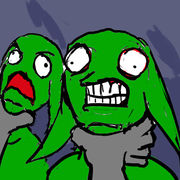 Remember this. This is important.

Goblin Choking Day is a day where everyone makes a quest which starts with the protagonist choking a one-eyed goblin. It happens every 10/10/10.

[1] Vytalibus accidentally the whole thing by posting a ??? quest.

[2] Beakie then kicked off the bandwagon by parodying it in the style of Silvermoon Clan Inheritence Wars Chronicles: My Brother I Will Defeat You.

[3] BiteQuest joined in, and ended up creating a Sergal quest with a canon 100% GOOD END, in which everyone who hadn't died already went on to live happily ever after.

[4] Gnoll added Renamon to his parody, which then crossed-over with Beakie's.

[5] Rand gave us a bonus mini-Tory's Tower chapter with a goblin-strangling robot, and there was much rejoicing.

[6] Robot referenced the now flourishing bandwagon in an update.

[7] TestPattern started A Legitimate Quest, following the tale of COMMANDER JAMES MISJIZDRAN MISFORTUNE 67c611, a fabulous TOZVRYXIEN. This one provides the page picture.

[8] Adept threw in some NicQuest strangling, complete with tea.

[9] You don't fucking know contributed to the choke-fest, as well.

[10] Larro decided to instead have Curi hug a goblin.

[11] And finally someone decided that if goblins and Renamon were going to be in the same place, there was only one logical conclusion.

The next Goblin Choking Day is scheduled for Friday October 10th, 2110. Mark your calendars!