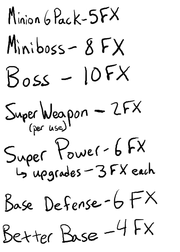 You are James Blacwick. Your father has died, passing on his legacy of supervillainy to you. Now you must perform great heists for FX and cash.

The central character of the quest, a hapless grocer turned ambitious villain after inheriting his father's supervillain contract.

The first heroes introduced, who are inexplicably convinced that Blackwick wants to destroy the world.

A monkey-faced hero with remarkable powers of construction and a terrible track record.

The manager of the grocery store where Blackwick works, Pig'Em's Grocery, and a huge villain fan.

A fairy-themed hero who has some pretty great pornographic fanart Blackwick was immediately charmed by and asked out. They now date.

A mobster villain who had the misfortune to walk in on our date with Debbie, but eventually turned out to be a pretty cool guy.

A pumpkin-themed villain. Much more terrifying than that sounds.

A drug-themed villain from Iron City. She has a reputation for being crazy that seems well-deserved, if a bit exaggerated.

A villain from Corneria who fights both heroes and villains in duels to the death.

A clown hero who alternates between depressed and batshit crazy.

A hero who has turned into a robot girl.

A powerful hero who has only one arm, but generally kicks ass. Carries a bible and has church bell noises when he uses his abilities.

A thin, fiery aura that cushions blows, and allows flight. Very stylish, and teleporting leaves fiery afterimages while it's active. It could be upgraded to protect from most environmental hazards. Being made of fire, it can be used to burn things. It is deactivated whenever Blackwick is fully immersed in water, but small amounts of water have no effect.

Allows to create and shape obsidian with bare hands. We have a single upgrade to creation rate, and can make a longsword in an instant. Larger things require more time. We can create at up to ten meters distant.

A healing power that only targets the Baron and is only useable once per day. The normal Heal power costs 6 FX, but with the above drawbacks, we got this at the base level for 2 FX. It heals all superficial wounds, can heal one moderate wound entirely, or can stabilize a severe wound.

The Paragon Powerset is the powers you got just for becoming a supervillain, and includes: Endurance, Reflexes, and Faster Recovery.

Improving Endurance effectively doubles the amount of punishment your body can take. Improving Reflexes improves your reaction time by a marginal amount. Faster Recovery improves your body's natural ability to heal itself, but not the need for medical attention.

Would let the Baron turn his body into Obsidian at will. This would grant him immunity to any side effects of his own obsidian, as well as granting him greater toughness overall. This would be an on/off all or nothing similar to Angel Frost's Fairy Form, without some improvements, which the Mayor says he can list for us if we decide on buying this. "It's not important if you don't. I just thought it would be neat if you did the same sort of thing as your dad. And, you'd be so damn shiny."

Some of the upgrades we could give to this power would overlap with fire aura upgrade options, and some would not. The mayor also mentions that combined with my Obsidian Shaping/Sculpting power, this could let him reattach, regrow, or resculpt broken body parts, allowing for a strange kind of self-healing power.

The Mayor says if I take a power like this, I can never take other body-element powers, so I should think on it carefully. Fire, lava, or Smoke might also be good choices, with my theme being what it is.

The Baron may gain extra FX by negotiating "drawbacks" with the mayor, such as weaknesses, limits on power capability, and narrowing a power's focus. The mayor gave a couple example drawbacks:

If the Baron is completely submerged in Water, his Fire Aura shuts off. So, he can't fly or burn things underwater right now. He can still teleport out of the water and then reignite his aura.

Pack of six Black Knights. Tough, slow, heavy-hitting types. Replenish at the end of the day when defeated.

Ninja Butler. Weak in melee combat, but as you might expect, very fast. Being a ninja, doesn't require Blackwick to carry him around, appearing and vanishing on the fly. He has been upgraded to have a personality.

The people we have met and exchanged contact cards with.

This quest is very awesome.

Appearances by the cast Inside the Quest, including The Baron Obsidian Advice Corner.