A quest Larro started on 4chan about a reluctant dungeonmaster. It has since moved to TGChan for further updates.

An auditor for Drachma Bank conscripted into running a dungeon. Before she can seek help lifting the curse trapping her there, she has to deal with its massive debt. Has managed to cobble together a mighty dungeon out of nothing but slime and frugality.

The King of Demons

Also known as Atrociatus Maldorium. Bastard DM who saddled Mary with his debt and his dungeon. Currently enjoying his ill-begotten retirement in the Hellpits.

The succubus mistress of a rival dungeon. She uses underhanded tactics to sabotage Mary.

Sentient magical constructs designed to resemble the First Dungeon's faithful servants. Every dungeon can summon their own copy of these to manage everyday facets of dungeon keeping. There are also two human employees, Alex and Isabelle.

Uses mana to teach new spells and create magical objects. With her upgrades, she can also convert runes to other known types of runes, meaning that we effectively have as many of every rune as we have total runes. Known as the Librarian before upgrading.

Uses runes to summon monsters and objects for the dungeon. In charge of monster management. With her upgrades, she can spend 2 of the same rune to create its opposite, leading to the discovery of new rune types.

Builds new rooms for the dungeon. Upgrading him increases the number and types of rooms he can build, as well as letting you add more floors to your dungeon. Known as the Builder before upgrading.

Cooks food for the dungeon staff. Basically in charge of staff morale. Upgrading him improves the quality of food he can make, and lets him throw bigger celebrations to improve morale. Known as the Cook before upgrading.

In charge of infusing monsters with additional runes, as well as coming up with new and horrific monster ideas. Upgrading her increases how many runes can be used in a single monster.

Invests gold in the demonic stock market and turns a demonic profit.

The final construct type. Allows the creation of Dungeon Master Gear. Can only equip the dungeon master with the equivalent might of a 3 rune monster to start.

Another Auditor from Drachma Bank. When Mary failed to return from the Dungeon of Pain, they sent out Alex to try collecting on the debt again. Mary used her newfound powers to trap her there too as an employee. Like Mary, Alex grew to appreciate her new job, deciding to become a demon through rune infusion.

A crippled orphan who was woefully unprepared to challenge the dungeon, but eager to try anyway. Mary gave her a job and some cool prosthetics.

The staff in their current forms

The oldest slime in Mary's dungeon. A one-rune monster.

Mary's first creation. Her core was damaged in an encounter with Jeffrey (see below). Now a six-rune slime, she can access the abilities of any three-rune or less slime monster in the dungeon.

Another basic slime, Ruth picked up a bat during her first fight and hasn't put it down since. Where did she even get one of those? Her bat's unusually powerful due to a glitch where it's treated as a physics object and not a weapon.

Every two-rune slime is in this subcategory. Originally created in order to farm the various rune types, their great number still serves the purpose of expanding Curi's arsenal of powers and acting as a recruitment pool for stronger slime monsters. Current types include:

Not actually a Poison Slime, but a mindless tentacle made of poisonous jelly. Splits when attacked.

A three-rune slime type with a bow. Not a bad shot, for a slime.

A wise slime combining the Fist and Psion runes. Skilled in close combat.

Formerly the Maid and Butler Slimes respectively. They operate the Slimecrown cafe and assist with Rosa's tea ceremony.

Two opposing schools of thought on luring adventurers: One tries to be more alluring, while the other is more... assertive.

A Cleric Plant that acts as an NPC offering healing services to adventurers in the citadel's main hub. Still a dangerous fighter if provoked.

A haughty Fancy/Royal Slime upgraded with a Magic Rune, currently serving as one half of a miniboss fight. Sees herself as the one true princess of Slimecrown Citadel. When Lily or her protector is defeated, they fuse to create a stronger second stage monster.

A Royal Slime Knight that defends his beloved Lily Slime as a miniboss. Depending on who is defeated first, their fusion can take different forms.

A Royal Slime Paladin charged with protecting the "prince" of Slimecrown Citadel.

A former Squire Slime, Prince Simon is the only male slime in the Royal Family. He is rarely seen apart from Rosalyn, his protector.

A former Mud Slime, she is the shyest sibling of the slime princesses. Her fighting style involves rocks.

A former Magma Slime, she is the most hot-headed of her siblings. Her fighting style involves punching people. With rocks.

A former Plant Slime, she is the eldest and most proper of her siblings. She oversees a challenge where adventurers must prepare tea instead of fighting. If need be, her fighting style involves poison, not rocks.

A former Oil Slime that runs the spa. Mary saw that Oilivia was having trouble keeping herself together as a two-rune slime, so she added more runes until she stabilized.

A deceptively powerful 5-rune slime formerly belonging to an adventurer. Its music is quite hypnotic.

A book with legs. Designed by the Archivist, it summons weapons from within its pages and, given time, can copy its opponent's weapon and fighting style.

A Shield Demon made of shields. Designed by Demonologist, named by the crown.

A gazer-type monster that constantly ogles everyone. Designed by Dungeoneer, she takes after her creator in many ways.

A stone slime and fire elemental that operate a forge in the Slimecrown Citadel. They offer to repair adventurers' gear for a fee.

A suspiciously familiar pocket-sized monster. Its power seems to have to do with magnets.

Tiny, weak insects that slow the flow of time around them. The more of them gather in one place, the stronger their effect gets.

A living doll with several layers controlled by a fairy inside.

A genie that can grant three and only three real wishes.

A delicious and colorful candy dragon with a slime breath attack.

An undead wizard that hangs out with the lost soldiers.

A wood demon that runs the farm. Old but still quite strong.

A young plant slime who works at the farm.

Straw constructs that guard the farm. One of them is infested with chaos.

Bred for their sheer fluff volume, but quite ornery.

A creature that is known for being stubborn but mighty. They can be taught to perform simple tasks.

A new healer, setting up in the town fountain. Similar to Ashley but their personalities are not the same.

A cloth based demon that can harass others for simple pranks. Can also combine with other demons to power them up.

An upgraded cloth slime. She does ghost stuff.

An upgraded lag mite that has great control over time in a small radius.

An upgraded string slime. She powers up and can control beast-runed monsters.

Magical creatures with soul runes that serve as villagers in the dungeon.

A monster summoned by the former King of Demons, costing him nearly everything he owned. Its total rune count is unknown, but it's really high, and a disturbing number of them are Chaos and Power Runes. Has killed almost everything it's encountered in one shot.

Also known as Knight Chevalier. The first challenger of the newly renovated "Dungeon of Pain." Thinking is not her strong suit. She's returned several times, getting stronger but not much smarter with every visit.

The Warrior's party members for her second and third attempts at the dungeon. The Mage is much more experienced than the Rogue, and seems to have a soft spot for him.

An aggressive murderhobo who seeks a challenge in battle. He gets a little less dismissive of the dungeon monsters after being thoroughly whupped before reaching the final boss. He returns with a group to fight the dungeon in Raid Mode.

Ronin's younger sister. She spared Ms. Bloops and defeated Lily and Reginald honorably, but her psionics were still no match for Jeffrey. She returns with a group to fight the dungeon in Raid Mode. 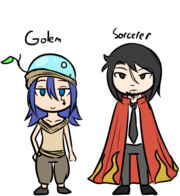 A bored office office worker intending to sweep the dungeon easily and his companion that does the actual heavy lifting. Golem was the first opponent to survive even a single attack from Jeffrey.

An Space Scout from the Fae sector of the galaxy who intended to "farm" Slimecrown's golems for Water runes to aid her people. She's not fat, it's suit insulation. She repaired Ruth's bat with Space Metal after accidentally breaking it. The suit has an onboard intelligence that can fight on when the wearer is incapacitated.

Another duo that intended to farm the dungeon over and over for a rare boss drop. Ronin handled the fighting, Alchemist handled the disparaging. Ronin is Psion's older psister.

Mysterious interlopers from another world. They weren't fully accustomed to the dangers of a dungeon run, but their appearance gained Mary a never-before-seen rune type.

Two seriously overpowered silent protagonists. Due to their high threat level, the dungeon was actually allowed to hire other adventurers to fight them. They decided to forfeit after learning that Mary's dungeon was no pushover. 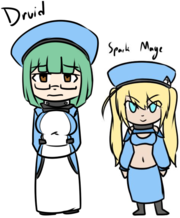 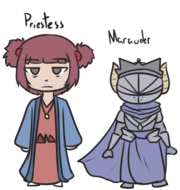 Two friends that joined a raid party made of Slimecrown veterans. Marauder is a pint sized tank and competent leader. Basically Warrior, but better in every way. Cleric is a part-time healer and full-time pessimist.

A complete jerk that left Mary high and dry when the King of Demons cursed her. Hobbies: golfing, firing people.

The Crown of Infinite Psyche

This is where the suggestors live. It belongs to the dungeon master. The point of view may change depending on who is wearing it.

The YUM Co. sales rep that sold us on a sponsorship. She had a daughter named Nueve once, but lost track of her when she wandered into (was abducted by) a dimensional rift. Oh well.