Tinker Quest is an ongoing quest about a young goblin tinker named Agga in a constant search for new technologies and gadgetry. Run by Vytalibus, readers help Agga with stuff like new ideas to invent, but might also have to deal with personal things later on. For creating new inventions, metagaming is allowed up to an extent, as the readers are free to add their own ideas to the quest.

Originally an unnamed quest, it was unofficially given the name "Tinker Quest" due to the occupation of the main character. Vyt initially named the quest "Goblin Quest" before deciding the name was too generic and might be confused with Gobbo Quest. Since then, he started using "Tinker Quest" as the name for his updates, though it has yet to be officially announced.

These characters are together for almost the entire time, and thus the readers have the option of asking for information directly from them. Only one of them can hear the readers directly (Agga), though this could change later on. 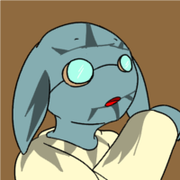 A young goblin tinker of undetermined gender. Agga is tactful and able to understand and care for others (revealed through some inventions, usually created to help others), though admits to being nervous during social conversations. Despite this, Agga is very open to Mika, and somehow can talk to anyone who is shorter than the tinker. Very naive and carefree, Agga keeps creating new inventions and understanding everything around without much worry. 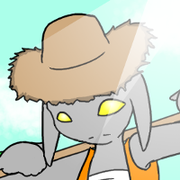 Originally the second character the readers can choose to "occupy" at the start, Mika reappears as a tomboyish fisher and Agga's best friend. She helps Agga with stuff like resources and invention, though her capabilities have yet to be assessed. She usually takes over most of the talking for Agga, though her brash attitude sometimes sets her notions apart from the tinker's. Nonetheless, she is a caring friend who looks out to the young tinker like her own sibling.

These characters have either known the goblin duo before the quest or come in contact with them during the quest. Most of them give out resources for Agga to work on, while others can grant some sort of help in other ways. 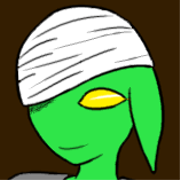 A goblin who guards the Bar in Agga and Mika's village. She helps the duo by giving out information on potential resources and people who can help them out with anything. She also offers escort duties for traveling parties, which she offers to the two. Her disfigured appearance is attributed to an explosion accident when she was scouting the nearby area for bandits. 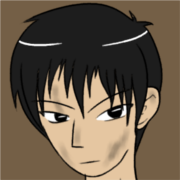 A human miner/merchant. He travels around to sell the products created from the metals he and his fellow miners extract. He mentions that their designated blacksmith left them for no specific reasons, and that he has been trying to do that specific job as a replacement blacksmith. He enlists the help of Agga to create tools for his blacksmithing, but later on calls the goblin duo to investigate an underground lake found in their mine. 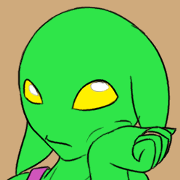 A goblin herbalist. She is Agga's mother, and thus takes good care of the tinker. She is very protective of Agga up to a point of enlisting Mika to act as the tinker bodyguard. She grows her own herbs just outside her hut, knowledge that she learns from an alchemist years ago. She admits to being an adventurer before finally settling down with Agga's unknown father.

Source of herbs and medicine.

Before the quest starts, the readers are chosen between a tinker or a fisher. They choose the former and are greeted by an explosion in their residence. The tinker emerges and is introduced as Agga, a young tinker of a small goblin settlement. Some time later, they are also introduced to a fisher named Mika who looks out to the tinker. Agga admits that they lack a consistent source of metal and so seeks out by the village. There, they meet Shirly, a bouncer and guard in a nearby establishment, who tells them of a traveling blacksmith who sells their merchandise. Shortly after, the said blacksmith emerges as Raynald, who mentions that he can provide Agga with metal granted that he is helped with tool improvement. After Agga proves that with some blueprints of better blacksmithing tools, Raynald nods to an agreement between him and the tinker.

The next day, the readers find Agga afflicted with a severe but brief headache. The tinker tells them that it has appeared consistently since starting off in profession, and that they emerge whenever they work too hard in a short amount of time. They head off towards the tinker's mother, Mama, who is also a practicing herbalist. After the readers, through Agga, indirectly corrects Mama as to what ingredients to include in the medicine, they engage in a short conversation about Agga's future and Mama's herbal studies. Eventually, Mama coaxes Agga into looking for someone who can help the tinker in their profession, as she convinces them that the village can only do so much in promoting their cause. Agga and Mika are then greeted by Raynald, who informs them that they have hit water in the mines and he needs their help once more. They move into the said water source when they are attacked by huge purple tendrils and pulled underwater.

Agga wakes up and notices they are submerged underwater, as well as having gained the ability to breathe in it. They are greeted (rather weirdly) by a blue creature with huge fins and purple glowing patterns on its body. Shortly afterwards, Agga meets up with Mika, who explains to them that they are now in a settlement of Ktulli, as she refers to the creatures around them. They are called upon by their leader, simply called the Alpha Ktullis, who gives them the warning that they were trespassing. After the two meet up with Raynald, who recovered after the attack, they are currently engaged into a discussion with the Alpha Ktullis about the matter.