Something something /quest/ wants to be the little necromancer girl.

In a few more words, the quest details the story of one Tiffany Blake, seeking to learn the black arts of necromancy to bring her brother back to life. Unfortunately, it now seems she has gone over her head.

Author's note: This article is intended for participants to collaborate on figuring stuff out. It'll be easier if you keep this page up to date. Also, hanging around #rubyquest or #tgchan when I'm updating is a Good Idea. Also, feel free to put wild theories in the discussion page, or the questdis thread.

Non-Authors note: This page was getting to be fucking huge, so information pertaining directly to the magic system has been moved to Tiffany: Runes

The Protagonist Tiffany is a little girl, a scion of both the Kinsley and Rothwald families. Her grandfather teaches her magic.

Tiffany's current scores are as follows:

Gregory Blake Dad is still hurting over the death of Tony, but lately he's been expressing it as a protectiveness of Tiffany.

A British Magical family. They have ancient magic stuff, a school, and some regulations regarding what is too evil to use.

Alexander Kinsley An old man who is skilled in necromancy. He is deemed a heretic by the Kinsley council of elders.

A warlock who's job it is to hunt evil stuff

A wise-cracking brand new apprentice from the Kinsley family.

A librarian of the Kinsleys, and an old friend of Thomas.

One of the Kinsleys' Hunters. Gareth's cousin.

A German Magical Family. They have money, and are willing to use anything they can.

The patriarch of the Rothwald Family.

A warlock from the Rothwald Family. Cousin to Julie Blake.

Demons, devils, and spirits. Any manner of thing which isn't human.

A very powerful and very old demon. Though he's a demon, he doesn't seem to be particularly evil, so much as dickish.

Death AKA Guardian of the Underworld AKA Watcher from the Abyss

Lords of the Underworld

There are thirteen great Lords of the Underworld. All but two have signed the Compact, the missing two are Khezet the Unseen and Hakuman the Dreamer.

People unlikely to have continued relevance

Long ago there existed powerful city-states ruled by wizard kings. They did all sorts of stuff that pissed off the Lords of the Underworld, who eventually went to war with the mortals. The war was known as the Harrowing, and was apparently devastating for the mortal side. Eventually the wizards did something that forced the Lords to agree to peace, and the peace treaty is known as the Compact. The exact contents of the Compact are so far unknown, but it essentially forbids the extension of life by magic and returning the dead to life etc. It also defines the duties and rules of the Guardian of the Underworld. It also tasks the mortals to create and maintain the border of the Underworld, known as the Threshold.

Runes are used to define the manner in which an effect should occur, and the haftsusha makes it happen. 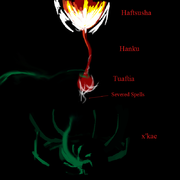 Every creature is composed of three parts. There's "tuaftia" or "soul", "hanku" or "breath" and "haftsusha" or "spirit".

Duncan's test measures a wizard's ability in five areas that we've labeled Awareness, Understanding, Synchronicity, Control and Spark. The scale is zero to five, and it's meant to be exponential. A three is twice as good as a two and so on. The council members all measures four or five in all areas. Balian himself managed a clean five fives.

Enchanted objects are divided into two categories based on how they are powered.

Talismans are objects with a spell cast on it. The casting is a one-time event and the object is infused with magic. Over time the magic will fade and lose effectiveness. Talismans range in complexity from simple ad-hoc creations to highly complex ones that are reimbued time and time again. An example of a simple talisman is Tiffany's anti-scrying amulet. An example of a complex talisman is the wardstone in the Adeleine safehouse.

Artifacts are objects with a spirit bound inside it, powering the magic. Artifacts are inherently more powerful than talismans. The complexity of the artifact is directly proportional to how cooperative the spirit in question is. The creation of artifacts is a time-consuming process that is prone to error, and is best left to people who truly know what they are doing. The most difficult part of creating artifacts is defining the desired effect. If you use a spell A to describe the desired effect B, something of the A can very easily leak into B. The methods used by master artificiers to avoid this are carefully guarded secrets. The most sophisticated artifacts feed the spirit with the users power, essentially allowing them to function indefinitely. Artifacts have even been known to grow in power as they age and are kept in use. An example of an artifact is Thomas' lance.

Revenants AKA the Undying AKA the Immortals

Mulder has appeared once Inside the Quest. [1]