One of the grandfather quests of tgchan. X days until The End is a quest about Simon, an astronomer who discovers that the world will end in 30 days. He figures he should do something about this.

“ Somewhere near the edge of the world... A man discovers that the world will end ”

The End follows the adventures of two Kiln astronomers, Simon and Io, and Clockwork butler Slater as they try to warn the world of Caelum of its impending doom. Their plans are complicated by unknown attackers; hidden agendas; a lack of funds; mayoral scandals; secret police; floors made of lava; loud confectioners; air pirates; and a possible international conspiracy to cause said impending doom. Also includes an exceptionally dapper tophat. 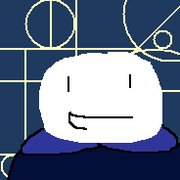 
Our primary protagonist, Simon is the astronomer responsible for first discovering that the world is doomed. The most optimistic of the bunch. 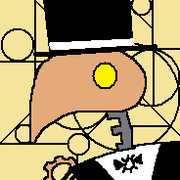 
Slater, Simon's Clockwork butler. Dapper and professional to the extreme.


Or at least former director of the A.S.S. Io joins Simon's quest after the rest of A.S.S. seems to turn against the two of them.

30 days until The End

Working late one night Simon finally discovers proof of his doomsday theory. He and his Clockwork butler pal Slater high-tail it to the Astronomical Studies Society (A.S.S) Headquarters to deliver Simons' findings to Director Io. While the astronomers are deliberating Simons' theory the A.S.S Headquarters is attacked by unknown assailants seemingly intent on killing Simon, Io and Slater. The gang flee to Slaters' home town of Clockburgh and seek refuge at Slaters' fathers house. While in Clockburgh the group consult an Oracle who sees the city of Mahbuht as their next destination; lacking money for the journey they first find work as mayoral candidate Tweed Tammanys' sleaze merchants....

28 days until The End

After receiving their ill gotten gains from Tweed the team gear up and make for Mahbuht. While visiting the library Simon stumble across the diary of Weaponsmiths guild nutjob Rob Oddard. The diary contains Robs plans for vengeance against god, which could also be the solution to the whole the end of the world thing. After making some more money in the Mahbut Bazaar and meeting a rather obnoxious member of the confectioners guild, the three set there sights on the Weaponsmiths Guild in search of materials and further info to put Robs' plan into effect. Unfortunately soon into their trip the trio are captured by Strawmen air pirates. Once on board the priates' airship the gang mange to escape and seize control of the ship, and again make for the remote Weaponsmiths Guild hall. Upon their arrival the heroes find the guildhall mysteriously abandoned save for one extremely loud confectionery salesman....

The End takes place in the world of Caelum, a world it shares with Ed Pastry's other spinoff quest, Antisex Quest.

The setting is notable for the bizarre level of technology development. While such high-tech inventions like electrical computers and powered flight exist; others, such as banking, guns and the internal combustion engine have yet to be discovered. 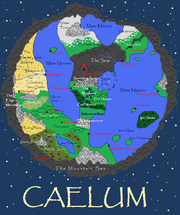 The world of Caelum

Caelum is a flat world...describe geography and cities (copypaste bay of soup)...creation myth here too or separate? 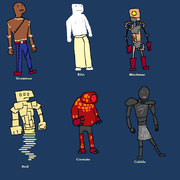