Still in progress, Authored by Chigui. 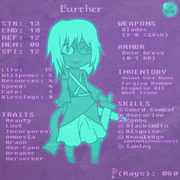 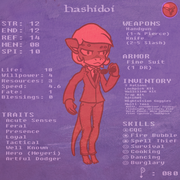 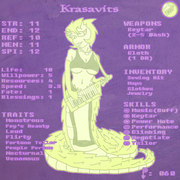 The system runs on 3d6 rolls, and rolling low is optimal. Most rolls are done against the five base stats and modifiers, whether bonuses for skills or advantages, or penalties for difficulty.

Secondary stats are mostly based on the base stats. They can all be expended or gained.

Life is the character's overall level of health. If they reach zero they are unconscious, and if they reach a negative amount inverse of their maximum health, they are considered dead. Death can only be circumvented by a few things in the world, and none of them are easy or guaranteed. Willpower is similar to, “MP,” in that it is used to access special skills like special moves, magic, and psychic abilities. Resources can be used in tandem with crafting skills. They allow for some leeway in inventory management as well, but all uses can be scrutinized and should make logical sense for the character. Fate Points are used by channeling a Trait to give your character an advantage. Traits can also be channeled in negative ways and allow you to earn Fate Points.

Skills are declared actions that a character is proficient in doing. There are three skill groups, and four main skill types.

Groups General: A broad and varied skill that allows the character to perform a large number of things centered around the subject. Can be used in combat with ease. (Further's Example: Sword Combat) Specific: A single action or type of action with limited parameters the character is capable of. These can also be used in combat. (Further's Examples: Overdrive and Combo.) Mundane: Often broad abilities that the character can do, but they take time. Usually hobbies, or crafts. These are the easiest to level and are considered long actions. Difficult to do in combat. Usually don't expend any consumable stats except Resources.

Types Proficiencies: Allows the character to skillfully wield weapon(s) or armor. Do not expend Willpower or Resources, but are dependent on the item the character is proficient in being present. (Example: Sword Combat) Abilities: Magic, Psychic, or Physical skills that the character has to fatigue themselves with in order to do something beneficial or damaging against a target. Expend willpower to use. These skills are usually obvious, but clarification can be made. (Examples: Overdrive and Combo) Crafting: The character can create something, or change things into something useful. These usually require the correct location, Resources, and time. (Examples: Disguise and Blacksmith) Sense: Communication abilities, Knowledge bases, and honed senses fall into this category. Most don't cost anything to use. (Examples: Knowledge(Animals/Monsters) and Taming)

Although the monetary system is usually known as Points, the most commonly exchanged unit of currency is the Ray. Most prices will be denoted in these units, and Further has 80 available to start.

Please don't feel limited by what you can “see listed.” Anything that is plausible to be done can be attempted in the system. Players will not be (purposely) punished for trying to think out of the box.

Lilac has multiple characters that can potentially work together during the Campaign.

The character already introduced is Further. Further is an entirely communal character, and is the default suggestion target. Please separate suggestions with a soft return, target's name, and a colon before the dialogue and actions, for example: Further: Try and do a thing. Hashidoi: Do something else.

The other characters in the party fall under the jurisdiction of the Officers that are responsible for the characters. Anyone is more than welcome to suggest for the other characters such as Hashidoi, but the Memory and Voice officers have the final say over their chosen dialogue and actions.

Memory Keeps track of stats, inventory, goals, and anything surrounding the character. Helps Voice make well informed decisions before the next update. Can suggest immediately. (Denoted with the character name in small-caps as their trip-code)

Voice A few hours to a day before the update the Voice weighs in all of the normal suggestions for actions and dialogue as well as keeping the character's personality in mind. Voice also makes the rolls needed for actions. (Denoted with the character name with the first letter capitalized as their trip-code)

Officers are usually in #lilac (irc.rizon.net) for discussion and to confirm what is needed for rolls before Voice posts, for example. If you are interested in becoming an officer, that is also the place to go.

Posting for Actions and Traits When suggesting for any character to use a Skill, or in order to use/earn a fate point.

Blessings: Can be used to alter the luck of a situation, or to increase the potency of an object temporarily. If a character follows a religion, they can be gained or lost based on convictions or restrictions surrounding their actions.

In order to channel a trait or use a blessing, a certain number of suggestions need to support it.

Traits can either benefit or hinder the character dramatically depending on the situation. It should be emphasized if it is good or bad. (Good costs a fate point, bad earns one).

Further requires a majority vote for using Fate or Blessings.

Party characters require a 2/3 majority vote for suggestions for Fate or Blessings regardless of Voice's decision. At least ½ with Voice's favor.

Fate Points can call most mundane actions as an instant success. Anything with a challenge (combat, rolls vs. enemies or another player character) are still rolled and have a chance of failure, but the chance of success is increased significantly.

Blessings are acquired more often by characters with high spirit and are used to alter rolls. They are not as potent as Fate Points.