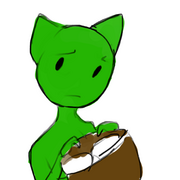 A green ASCII monk girl, Age 18, Born 2/29 and has a Chan decendency from TGchan. Her skills include high martial arts abilities and a healing factor. Naomi does not specialize in Willpower or Technology, as a trade off. She currently possess the Orb of Infinite Psyche. Naomi is on a mission to visit 4chan's /co/ and possibly /k/ boards in an effort to combat the threat of furfags.

A french anon, Jacques quickly became friends with Naomi after he offered to pay for a hotel room on their way to 4chan. Used to be an incubus according to a flashback. Current abilities are unknown. 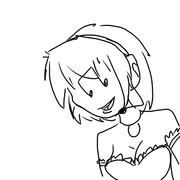 A citizen of Mikuchan, Achtel quickly took a liking to Naomi so much that she bought her a new outfit. Her singing irritates Naomi, though.

We meet Naomi and a frenchman, Jacques. They stay at a hotel, Naomi sneaks a peek at Jacques' butt. Jacques has a bar code tattoo. Naomi handcuffs Jacques to the bed.

We find out Jacques is on the run. Naomi and Jacques are attacked by furries. Poor frenchie is mortally wounded.

Jacques the incubus (as we discover) reminisces while injured. Naomi kicks furry ass, and then has a dream about butt wings and Jacques.

Chapter 4: Music in my ears

Naomi disembarks the hyperlink and enters Mikuchan. Perturbed by all the singing, Naomi runs into Achtel who buys Naomi a cute new outfit. Jacques shows up all better, and they all take flight in a Pelican (the bird). Naomi grabs Jacques' butt.

The Pelican stops to rest (for two weeks). Our heroes manage to punch a velociraptor in the snout to establish superiority and ride it to /weed/. However, they first stop at a house to help a boy. Darker forces become apparent in the house, but a shotacat attempts to kidnap the boy. The kidnapping is foiled when Naomi delivers a Rider Kick to the cat.

Naomi's appearances Inside the Quest.