An investigative sci-fi mystery. Featuring Ayu, attempting to discover why E and Es cadets were the target of an attack.

Set in Lans, a world existing mostly as a very large ocean, dotted by many islands and reefs. Populating Lans are humanoids, automatons and alien Creep in a massive standoff. 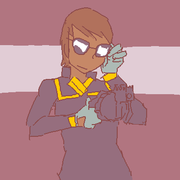 Background: A derelict clone who enlisted to the Overmars security force upon arrival there. E rose through the ranks and eventually settled, conducting outreach tending to the still ongoing refugee crisis. 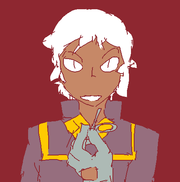 Background: A white haired,potentially schizophrenic cadet who single handedly launched an attack Overmars security force. Ayu is tasked with finding her. Not much else is known at this time. 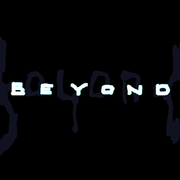 Ayu, our protagonist, wakes up with a splitting headache and very little memory of where or who E is. Shortly discovered by superior (or fellow) officers, Ayu is informed that E is on a train headed to a ceremony in Edison Hall, Overmars. However, Ayu picks up that something may be wrong in the background. After asking one officer some incredibly personal questions Ayu decides it prudent to get ready for the ceremony. At the ceremony Ayu is tasked with decorating the cadets, however, when decorating the last cadet the cadet pulls a grenade on Ayu in an apparent suicide attack. Ayu makes an attempt to save the cadets by kicking the grenade down the hall, but it appears to be some sort of chemical bomb, vaporizing all in the room but Ayu and the aggressing cadet. Ayu, recovering from blindness inflicted by the bomb attempts to apprehend the last cadet, who reveals her name to be Kari before fleeing. Ayu, giving chase, is hindered by local monsters and a civilian survivor of the attack and a body. Ayu then regroups with officers at the attack site, briefing them shortly on the attack. Later, Ayu confers with the officer who's comfort zone E egregiously violated earlier (discovering that he is in fact named Sterling) and gets information regarding Kari's (Melissa's?) last contacts. Ayu then lapses into sleep, having an apparent flashback. 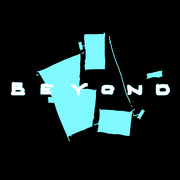