Will of the Undermind

Something something green-skinned space babes turned up to 11 seeking psychic-powering space rocks. Has a remarkable amount of fanart, most of which is pornographic.

The Scellor are a mostly hive-minded race, but some of their members become individuals for a lifetime or two every so often when they get bored. One such Scellor decides to reincarnate as a worker-caste engineer, names herself Maolla Syrup, and then determines to become a space pirate.

Before becoming a space pirate she needs money and respect, though, so she signs up for a mining crew prospecting the vastness of space for psykonium, an incredibly valuable psychic-enhancing mineral. Naturally, after some time working on the ship something goes horribly wrong and it's up to Maolla to figure out what it is and fix it- even when that means saving the rest of the crew, repairing the ship in dangerous conditions, and fighting off mind-controlled space doobies. 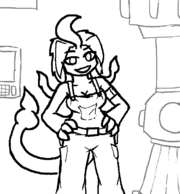 A race of plant-animal creatures with psychic abilities and a universal hive mind that still allows for individual personalities from members. Come in many different casts that allow for further diversity. Scellor start life as nonsentient drones controlled directly by the Undermind, the collective consciousness of all the dead and yet to be born scellor (which for them are the same thing) and eventually have strong enough emotions to gain wills of their own. 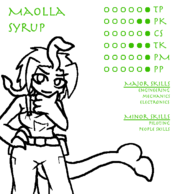