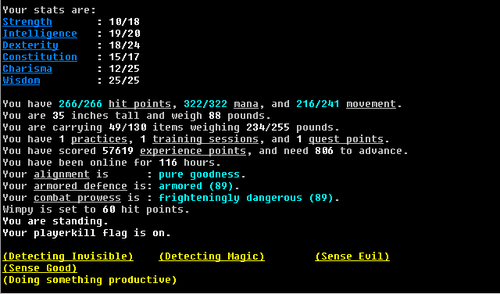 Well at least somebody is

TGMUD is a text-based action/adventure game run on an extensively modified version of the 5.6.2 CoffeeMUD Engine. It is developed mostly by quest authors and the project is headed by Blackjack. Its offshoots include RUBYMUD and StrataMUD.

Use some kind of client (MUSHclient is good) and connect tor
IP: www5.tgchan.org PORT: 5555
to get in the game.

There are six stats:

(* Denotes custom classes) (** Denotes classes in the works or being considered )

You may also apply to use a non-player race among existing monster races.

Rundown of How To Play

TGMUD is made up of areas full of rooms. To look around the room, use the Look command. Look can also be used for other things, like looking at players, looking at mobs (creatures), looking at yourself, and looking at items. Sometimes, you will want to examine something more closely. Examine can be used to see more traits of rooms, items, mobs, and players. This will not show everything, however, some abilities may be required (depending on your intelligence stat and racial abilities) to see invisible or hidden things, in the dark, equipment values, and other traits.

To see your character's stats, use the Score command (or sc; many commands can be shortened). This will show general things like your size and age, your classes, stats, combat and defense levels, practice and training points (used to increase skill proficiency and learn new skills respectively), hunger/thirst levels, and some other values.

Some rooms will have doors. the Open command can be used to open them. Sometimes the doors are locked. If you have the key, you can use Unlock, but if not you will have to get one or use an ability like pick locks.

Channels will display the channels you can speak in. Stuff like Chat

Do not forget, you can turn off channels (especially auction) if you don't want to see the spam.

Auction is not used very often, but if there is an auction going you can bid on it using Auction Bid # where # is the amount you wish to bid. Value can be used with shopkeepers to see how much they will pay for an item.