A quest about a young college student who dies in a mysterious accident, only to find himself trapped in a realm between Heaven and Hell, a Limbo world. A strange reality where deceased people roam and are judged based on how they live their life. Will you go to Heaven or Hell? Or will you rebel and try to escape this cycle of judgment?

George is your average human being. A young, full-time student with dreams and aspirations just like anyone else. But when he wakes up one day to find himself in a realm called the Ether, he's informed that he has died and must await judgment from a Council, to decide whether he goes to Heaven or Hell. George has no idea how or why he died, and is only left with his fleeting memories and a magic pencil to explore the great Ether.

The local people of this land of limbo are called Spirins. An ethereal race of beings that are able to shapeshift into humanoid characters. Shortly after he wakes up, George finds a Spirin girl named Mara, who is eager to make new friends and happily joins George to wherever he may wind up.

All major and minor characters that appear in the quest. 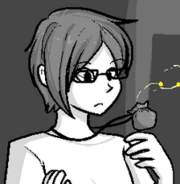 The main protagonist and playable character of the story. You play as George Ivanhoe, a full-time college student, until he dies in a mysterious accident leaving him stranded in the Ether. 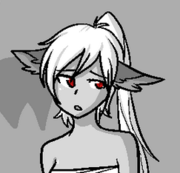 Your Spirin companion, with whom you met on a giant rock island. She loves making friends, but unfortunately, for whatever reason, has a tough time with it. She's thrilled when she discovers your acceptance of her. Is of the Greater Spirin classification. 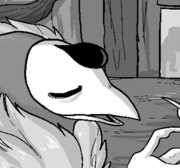 The stoic and serious owner of the Main District bank. He takes care of all of the finances of the area. Giving out loans, creating accounts, and perhaps lending an ear to anyone who needs to vent. The Banker runs a strict business though, and will crack down on anyone who doesn't follow his rules and regulations. The penalty for an overdue loan repayment can be brutal, so he often advises against it. Is of the Greater Spirin classification. 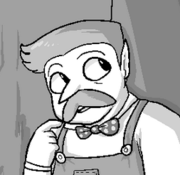 An upbeat, jolly Spirin who runs a shop named Edgar's Tinkers and Wares. He sells everything from knick knacks to relics to anything that can be collected or used as tools. Edgar has been running his business for centuries now, and isn't a fan of any funny business in his shop! He's very successful, as most of his stock is donated, or found on the ground. Edgar is always willing to offer advice to anyone who asks, and is a plethora of knowledge. But he's an honest man, and won't partake in anything that violates Ether law.

Limbo takes place in...well, a limbo. A realm between Heaven and Hell, where people who die go to wait out their judgment.

The entire realm that the story is set in, is called The Ether. It harbors all of the deceased souls that pass on from the mortal world. It mostly consists of floating rock islands and rock structures, as rock is, for the most part, the only significant resource there. The Ether is broken up into districts that separate varying parts that perform different roles. The dominant leader of the Ether is Asward, the lord and king of the Ether. This realm expands almost infinitely, with no apparent end. The floating platforms that are scattered across the Ether provide convenient paths for Spirin. But they can prove to be a risky mode of transportation, as unstable rocky platforms have been known to crumble.

The Main District is the central location where the majority of souls flock to once they enter the Ether. It is large enough to house plenty of souls and is by far the largest and most populated area of the Ether. It's one of the only places where shops, restaurants, inns and banks can be readily found. There are also plenty of jobs that are offered to souls here, that pay in Pents, the currency of the Ether. In order to enter the Main District, one must go through one of the several harbors that take in transportation platforms. Each harbor is guarded by a Keeper, which verifies the person's identity and protects against intrusion. Any unauthorized entrance will quickly be seen to by a Reformer. 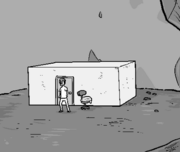 George on his Rock Corpse

Elegantly named Rock Corpses by the local population, each soul who dies is placed on a large rock island that imitates the scene of death. If one were to die in a plane crash, for example, they would awake inside a replica of the plane which would be subsequently placed on a huge rock platform. Rock Corpses also tend to transport human objects known as Relics into the Ether, which can be manipulated to wield magical abilities.