Escape is a super old quest by Driblis about an orc and his assorted hangers-on trying to escape the mysterious place that they find themselves in. Despite his violent and brutish nature, Ugluk the Ironhanded has formed a small party of fellow escapees, and is slowly adapting to his new leadership role.

Characters are listed in order of appearance.

Ugluk is an orcish warrior, trained in axe fighting and more than capable with most weaponry that he recognizes. His only goal is escape, and he's professed intent to plow through anything and anyone that stands in his way. He has mentioned 'wives and children' back home. Ugluk is a bit violent and not all that bright by human standards, but he still values loyalty and knows the use of having allies in his situation. 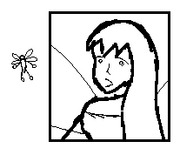 Mariana is a fairy, a fey creature of magic that has been imprisoned along with the more mundane orcs and kobolds. She was locked in a weapons cabinet when Ugluk first found her, and has alternately shown scorn and fear towards the orc. She knows at least five languages, and has casually used magic a number of times. It has recently been revealed that she has... unusual dietary restrictions.

Jrifdlib is a male kobold, found in the same cell as Klildril. He's fiercely protective of her, even standing up to an orc three times his size, unarmed. He's spoken to Mariana about being a knife user, and now holds the survival knife that the party found. He also has a jaunty chapeau made of a pinup poster.

Klildril is a female kobold, found in the same cell as Jrifdlib. She's shown herself to be fairly cowardly, hiding behind Jrifdlib during most conflict. She doesn't appear to know any Orcish or Common, and has only spoken in Koboldric. She is a clothier in her camp.

Ugluk has made one appearance Inside the Quest. [1]