Dragon Dance is a collaborative effort between the hobby artists/writers Zeekar and Kamon taking place in the Marmalade Workshop (universe) line of stories. Its narrative consists of a mix of first person styles: An omnipresent first-person voice and an overlapping stream of consciousness monologue coexisting therein. /Quest/ manifests as Wedgie's subconscious thought.

Updates often follow a comic/manga style layout (as well as the occasional animation) to allow for more fleshed out action sequences in a single update.

Dragon Dance is the story of Wedgie - a half dragon, half demihuman; an impossible bloodline that alienates them from the world. As it would turn out, Immortal blood was never meant for a mortal shell. The story revolves around the inner struggles and physical upheavals in Wedgie's life as they try to cope with their bloodline (and all the issues it brings), the people they meet and perhaps most frightening of all, their past.

This quest is currently active and in it's first real chapter (chapter 0 being a prologue). Barring life circumstances, Dragon Dance's planned update schedule is every other day, usually between the hours 1500CST and 100CST. 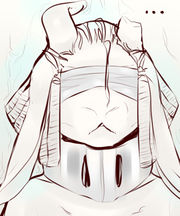 Wedgie prepares to make her move.

An immortal Willer of partial dragon heritage with the ability to sense, eat and manipulate mana on a higher level. Despite being the central character, little is known about them. Wedgie supposedly needs to wear a blindfold at (all?) times, but their keen ears and magic sight makes this a non-issue.

Cris inquires about the state of her companions.

A girl born blind - now a slave. Nothing is currently known about her, but it doesn't seem as though she arrived alone. Whoever she was with is long-gone.