One late night, a doomed exile screams at the voices in his own head that he'll kill them even if he has to die in the process. One day later, a dutiful monk of the Path of Lights finds the body, and he begins hearing strange voices...

Vil: A group of star-worshipping priests sometimes called 'the orphaned order'. Made up of orphans and runaways.

Moq: A group of snobby jerks who document stuff, according to Laakuni.

Dex: A group of engineers and builders.

Stellars: Some monks who speak directly to Stell, their world's star.

Vil Laakuni: A dutiful, kind-hearted Vil who stumbles across a strange curse.

Moq Rekkia: A haughty Moq who develops an attraction to Laakuni after she hears the voices.

Stell: The star above the world Laakuni lives in. He's apparently pretty rad. 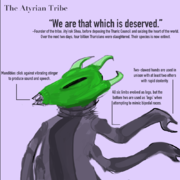