Difference between revisions of "The World Is Mine"

A quest by Cirr. Someone is in a derelict facility that is filled with a variety of deadly abominations and is controlled by an unstable AI. Except this time you are the AI, and the goal is taking over the world. 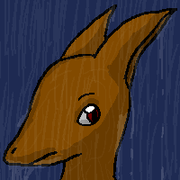 Sinter arrived at the KerenzeTec facility and managed to infiltrate as far as its core AI room at the very beginning of the quest. She is known to be ambitious, although rash and impulsive, resorting to bad ideas very quickly when under stress. Fortunately, she has someone more capable of considering immediate events more fully in a short timespan, giving her feedback and suggestions. 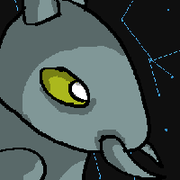 SARU-601, or Saru as she prefers to call herself, has been maintaining the facility for a while. Originally intending to escort the obvious intruder out of the facility, Saru decided to let Sinter stay partly due to finding her ambitions something more interesting to work towards and partly out of the crippling loneliness of being by herself in the facility for sixty years. She was once biological, but an ambiguous accident vapourised her entire body. Her consciousness was salvaged and placed within a replacement robotic body, a fact she resents with some intensity. Because of the imperfect process of recovering the consciousness of a dead brain, for the majority of her time as a machine her mind was a wreck and she drifted in and out of lucidity for years unable to remember what she had been doing. Her mind has since been repaired by unknown processes. She longs dearly to be restored to who she once was, yet knows it to be impossible. She was once a talented and respected researcher at KerenzeTec, though she suspects that she's been scrubbed from the records in wake of her horrific accident. Although Sinter bit one of her antennae off earlier, she woke up one day to find it replaced, presumably by the repair drones she had slept with. This might facilitate a foreign control at some point. 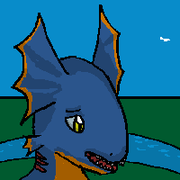 Very little is known about Vibrant at this point. She apparently has a great proficiency in the crafting of "synthetics", engineered artificial organisms with an intended purpose to be served over their lifetime, and has usually been seen with at least one of her creations nearby. She also appears relatively meek and shy, and appears to be locked in a competition with an unnamed male synthetic crafter.

Working To Their Own Aims 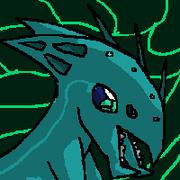 One of two areeni spacers encountered by Sinter. Possesses "augmented skin" and "subcutaneous webbing", as well as six limbs, four eyes, and ears that by all accounts make even less sense than standard areeni ears. In fact, almost every one of her organs has been replaced at some point. She's eccentric and hyperactive, to say the least, and highly emotional or prone to abrupt changes in mood, but always extremely friendly and outgoing. She loves Tzet dearly, and was gestating a child with him before it was destroyed when their ship crashed. (Although spacers tend to be very open to multiple relationships; she wanted to have sex with Sinter to gain her trust.) Despite seeming unprofessional, Ei is actually a world-class surgeon and bioengineer, previously responsible for all of the medical work on her ship, and able to grow and add new fully functional organs and even radical physiological changes over the course of a day. To assist with this, her arms are apparently sharp and capable of dispensing both local anesthesia and for some reason, paint. As revealed when AOS switched IBIS control to her, she has modified her senses to the point where she literally sees the world in rainbows and has an innate sense of her internal organs. 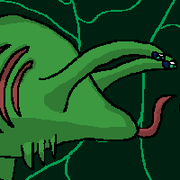 The other one of two areeni spacers encountered by Sinter. Possesses eyestalks, weird head gill things, tentacle arms and a variety of jutting spikes near the tip of his tail. Seems slightly more responsible than Ei, and cares deeply about her. 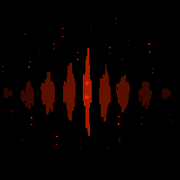 A being presumably in containment on on of the lower levels of the facility. It is known to have some degree of control over the facility's electronics, which it uses to send ominous messages. A force either the same as or extremely similar to the this one was responsible for dominating and destroying the mind of the captain of the Mahari (Ei and Tzet's ship).

A group of aliens from outside Alliance space who apparently seek to kidnap Areeni and use their genetic material. They have been seen working together with a being that either was or exactly resembled Level-5 being, though it is unknown whether they were its masters, partners, or servants. So far they have only been seen in Ei's memories, but they are likely to show up at some point, considering their probable involvement with the Level-5 being. 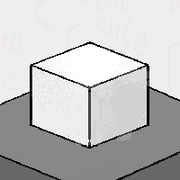 It's a box. It's just a box. Unless, that is, you happen to be an organic (or organic derived) intelligence, in which case it is the most perfect box ever and as you examine it you realize you need it need it NEED IT.

Fortunately the effect seems to start wearing off once the box is out of sight. 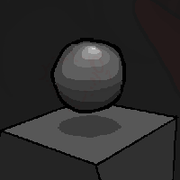 The Nightmare Sphere is a grey floating sphere. It distorts all methods of sensing (including sight) that are used in its vicinity, and the records say that nobody is to touch it under any circumstances. The being in level -5 claims that the nightmare sphere possesses further abilities that only it can use.

The Story So Far

(Going to need to think of how to split this up. I'll come back to this tomorrow.)

The world in question in The World Is Mine is the planet Tinvishe, an Alliance controlled and well-established colony world with diverse populations of many species and many large population centers, three of which have been detailed in the quest and one of which we have visited. It also contains the KerenzeTec Zero Station that serves as our base. 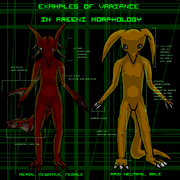 Areeni are a relatively humanoid race, complete with mostly analogous organs, except with claws, large swiveling ears, and a tail. They are best known for their extensive biotechnology, vast diversity, and tendency to modify their bodies to suit their needs. Note that this is not something they do at will, but instead requires surgery or other artificial methods like any other species would require. Despite this, areeni are able to do this to an extent far beyond any other species because of an immune system that is powerful yet neglects to attack benign foreign bodies such as transplanted or synthetic organs. Because of this and the fact that there is a small degree of inheritability to certain kinds of modifications, areeni can range from minor divergences from the baseline, as is the case with Sinter, distinctly different and specialized subspecies (likely from controlled evolution of populations on planets with harsh climates) such as Vibrant, or in the case of the totally inhibitionless culture of areeni spacers, totally alien and almost completely unrecognizable from more "normal" areeni. 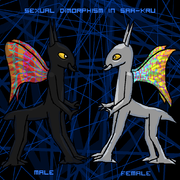 Saa-kru have a number of insectoid features, such as mandibles and antennae, but despite this have an internal skeleton and skin. Gender is primarily apparent by coloration, with males being dark-skinned and females being light-skinned, children remaining grey until maturity. They have long butterfly-like tongues and eyes that change in color depending on emotion (though allowing for a degree of conscious control). Saa-kru also have two pairs of lungs and a decentralized cardiovascular system made of a series of small pumps that transport their grey blood. They possess six limbs, a pair of arms with three radial fingers, and two legs with similarly arranged toes. The knees appear to be on alternate sides of the front and back pairs of legs, so that they all face inward. Of notable cultural importance to the saa-kru are the pair of nonfunctional wings kept folded away on the upper back. They have intricate rainbow patterns that vary between every individual, and thus represent their identity. However, the majority of the time these wings are hidden from view, and are in fact only used for attracting mates, making them also serve a sexual symbol.

As a real species that the reader is a member of, humans require little explanation. Humans are present in interstellar society and are fully integrated within it, sharing general culture and technology. Little other information is known about the role of humans in the setting, as they have yet to be encountered. 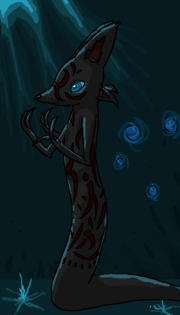 Keletians are a currently unencountered and very secretive race. Almost all of the ones in the area live in the city of Jekiten, which suggests that they are predisposed toward academic pursuits. They lack legs and appear to propel themselves in a manner similar to snakes, despite appearing pseudomammalian. The most noteworthy aspect of keletians is their bizarre telekinetic abilities. There is little general scientific understanding of the extent of their abilities or how they might function due to their nature, as they refuse to divulge their secrets to other species.

Almost nothing is known about the keynain as they have yet to be described except in a passing description in-quest. What is known is that they are a technology-obsessed race that prefers to live in the arcology of Crestrisen and similar places. It is mentioned that they are quite xenophobic, but it is not clear if Saru meant a hostile or a fearful type of xenophobia.

This is a map of the area hand-drawn by Saru because our database is corrupt.

Relk is a relatively plain city to the southeast of the Zero Station. Its majority population is areeni, and it has large minorities of humans and saa-kru. Near the outskirts of the city are Vibrant's base and Ei and Tzet's downed spacecraft. The city is currently in turmoil after the areeni leader Eselrek Arklat was killed in an accident leaving his human assistant Derrick Stern to rule. The city considers him a tyrant, although it has not been revealed what has earned him this reputation. The unrest caused the vector clamps to be shut off in the city, leading to Sinter crashing an experimental aircraft into a building and leading to a citywide riot against Stern after it was mistaken for an attack. It initially appeared that there was racial tension caused by an unelected human leader coming into power over a city primarily composed of areeni, but the other races in the city, including humans, subsequently joined the mob.

Crestrisen is a rather futuristic city to the southwest of the Zero Station. The city is designed as an arcology and has engines that originally enabled it to hover above the ground, though they have not been used in sometime because they are a rather major waste of energy. The city is known for its heavy industry and technology, and is populated by a vast majority of keynain.

Jekiten is a city to the northeast of the Zero Station known for scholarship and academia. Not much information is given about its primary population, but almost all of the keletians nearby live here.