Rules: Players in this game are fighting for their king, they are to engage in melee combat and fight the opposing force. The object of this game is for the king's men to clear the tile grid of the opposing force. Turns are comprised of a move action and an attack or passive action. Each unit takes up one tile on the grid and can interact with objects or other characters on the grid.

Reading the Unit sheet: Move indicates the number of tiles a unit can move in any direction. HP stands for the health points a unit has, if this number drops to 0 the character is considered “incapacitated” for this character cannot take anymore actions until the end of engagement. If the characters HP drops below 0 he is considered “Dead” where the player must generate a new character and his old character's body is now an object that other players may interact with. Atk is the amount of attack damage based on weapon currently equipped, this is the main score used to determine how much damage other characters take when an attack action is used against them. Df stands for defense, this number determines how much damage is subtracted from attacks directed towards this character, if an attack is greater then twice the defense of a character's armor then the armor or object is destroyed. Multiple attacks against a single characters armor stack. Feats are either abilities or moves that improve character effectiveness. Capacity is the number of objects a character can have on his person. A character gains an extra feat or can raise an attribute by 1 once every 10 kills. If a player is shown to be competent in the eyes of the king (be the most valuable asset in an engagement), he may be given a chance to raise any stat by 1 point or gain 1 extra feat as well. 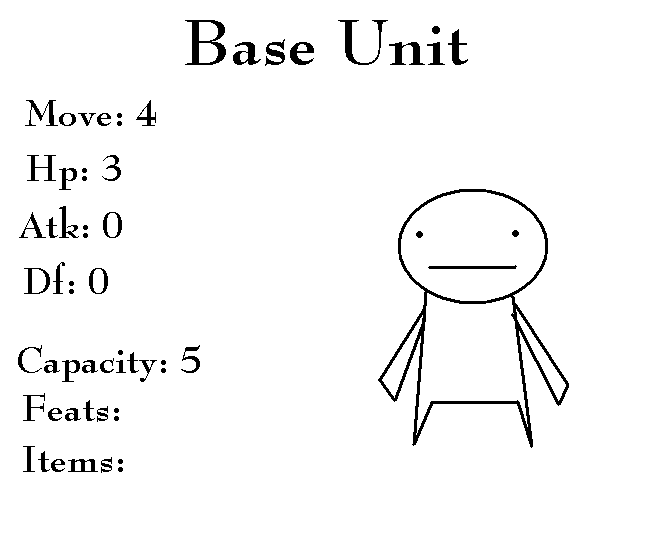 Item naming rules (so as to designate level of item)

The same poison does not stack on a single character.