Deep in interstellar space, a massive ship trundles on. A pinnacle of engineering of its kind, its destination is a new home. A home called Borgas IV, a habitable planet of the Borgas system. Will they reach their destination safely? Will doom bar their path? Only Engineer Hugo Packagebord knows... maybe? 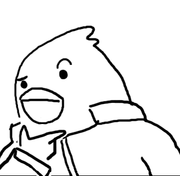 An engineer recently awakened from cryostasis. His identification number is 29100009.

Science division's Head of Research. He was found tied to a VR simulation machine. This was apparently as punishment for breaking the living quarters' vending machine.

Hugo Packagebord has made one appearance Inside the Quest. [1]